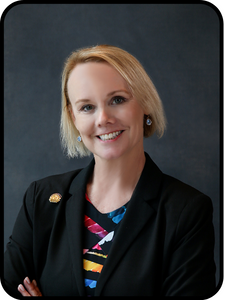 Christine Citrano was born and raised in the San Francisco Bay Area. She spent several years in the Philadelphia Main Line area and then relocated to Naples, Florida in 2003. She earned her real estate license in 2004 and has been successfully practicing residential real estate in the Greater Naples, Florida area since.

As a team member of the Citrano-Batten Team at John R. Wood Properties, Christine works with Buyers and Sellers, helping them with their residential needs. She and her business partner, Jeannette Batten, first met through the Women’s Council of REALTORS® in 2010 and formed their team in 2019. They have frequently been in the Top Ten at the Fifth Avenue office for production and attribute a great deal of their success to the strengths that they bring to their team.

Christine is serving as the 2022 National Liaison for the Western Region and is a member of the National Executive Committee.

Christine believes in education, mentoring others in their leadership journey, and being an active member within her industry.

She is a President’s Circle Gold Member of RPAC.